The batting order in any softball game can determine whether a team wins or loses. Therefore, this article will outline an ideal softball batting order so you can score the most runs possible.

In most softball games, there are nine batters. Some tournaments allow managers to have ten batters. Softball managers and coaches generally build their lineups in the same way. They keep in mind that the batters near the top of the lineup (at the beginning) will get more at-bats than the batters at the bottom of the lineup (the end). And, every manager wants their best batters to get more opportunities to get hits and score runs.

Let’s look at what an ideal softball batting order looks like.

The first batter in the lineup should be the person who gets on base the most, whether through base hits or walks. Often, this batter is also the fastest runner on the team because getting to first base is important, but being able to steal second takes away the opportunity for a double play from a later batter.

In fastpitch softball, the first batter is often a speedy left-handed batter who can bunt or slap bunt and quickly get to first base. If your team doesn’t have someone who can do that, then the lead-off batter is the person with the best On Base Percentage stats. This person should have plenty of confidence at the plate, because leading off can take a great deal of patience.

The #1 batter is often a speedy outfielder. Mookie Betts of the Los Angeles Dodgers is a perfect lead-off batter. So, is George Springer from the Houston Astros, and Charlie Blackmon of the Colorado Rockies. They are fast, but they can also hit for power.

The role of the second batter has changed recently.

Not too long ago, this was a batter who was fast, almost like the lead-off batter. Now, the ideal number-two batter is someone like Mike Trout – fast and powerful. However, some softball managers choose bunters who can move the runner, especially if the lead-off batter isn’t able to steal on sheer speed alone. Kris Bryant is another notable number 2 hitter because he’s a guy you want at the plate as often as possible.

This batter is often an outfielder, but could also be a third-baseman or shortstop who can hit with some power.

The first three batters will have more at-bats throughout the season that anyone else on the team. The third batter should be the best hitter on the team, unless the manager wants that hitter in the two hole.

The third batter is often the person who ends up with the most RBI because hopefully, the first two batters become baserunners who score when the number three hitter sees the right pitch.

Famous number three hitters in the MLB include Miguel Cabrera from the Detroit Tigers, Nolan Arenado from the Rockies, and Alex Bregman from the Astros.

The fourth batter might not get as many at-bats as the top of the lineup, but if the top three batters do their jobs and get on base, the fourth batter can have some serious fun. This batter is often called the “clean-up hitter” because this batter’s job is to clear the bases. They can drive in runs and hit for extra-bases.

When it comes to baseball, men like Albert Pujols of the Los Angeles Angels define the clean-up batter. Home-run-hitter-extraordinaire, Khris Davis, of the Oakland Athletics is another good choice. Softball players can hit home runs, too, so your number four batter should be the one who hits the most of them.

This batter is often the first or third baseman, or the player who is the designated hitter (DH) in baseball or the designated player (DP) in softball.

If the first three batters don’t get on base, the fourth batter will leadoff the next inning and the number five batter will be tasked with moving the baserunner. So, the fifth batter is important.

In today’s baseball world, Matt Muncy from the Los Angeles Dodgers and Nick Markakis from the Atlanta Braves bat fifth. These men have outstanding batting stats and could easily be in the top third of the lineup, but their consistency and power landed them in the fifth spot.

In softball, the fifth batter might be another outfielder or the corner outfielder who is not batting third or fourth.

There isn’t a particular position that consistently bats sixth.

These are the only two spots that don’t have specific roles other than to get at-bats and hopefully get on base. These batters are usually the weakest on the team, otherwise they would be higher up in the order.

While many people believe this batter is the worst on the team, some teams think of the ninth batter as the second leadoff, because this batter needs to be fast so as not to slow the first batter. You usually do not see power hitters in the ninth spot.

In baseball, National League teams usually put the pitcher in this spot because pitchers usually do not hit well. However, Joe Maddon the manager of the Chicago Cubs began putting pitchers in the eight hole to give speedy hitters the ninth spot. 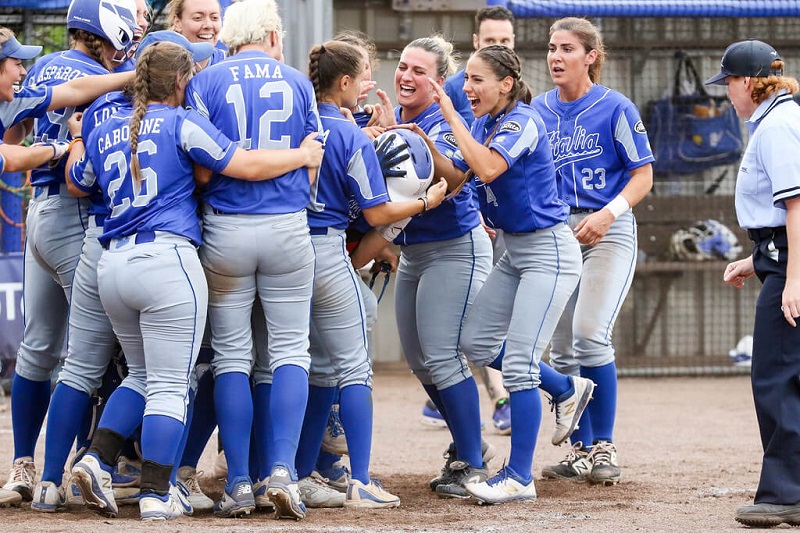 Factors to also Consider: Age and Experience of the Team

If you are coaching a fastpitch team where the players haven’t yet started high school, the best choice for your lineup is to place batters based on their abilities. The best three batters at the top and so on. However, if you are dedicated to teaching them to play ball, you should change the lineup regularly to give players equal opportunities to bat.

However, once you get to a competitive level where players have honed their skills, you should seriously consider the makeup of your lineup, especially if their stats support creating a lineup that fits the stereotypes. If you’re lucky, you have players who are so good that they can be moved through various spots.

Pay attention to your players’ stats throughout the season, especially if you want the best lineup in every game. Some players go through hot streaks and cold snaps so they should be moved up and down accordingly. If you are moving a player down because of a cold bat, you should talk to the batter first so she understands why you are making the change.

While some managers will make their batting orders based on hunches, statistics are a better tool to use to determine who hits where in the lineup. Using players statistics will show managers which players are making contact, and have the best chance to score runs. In addition, managers use other stats to outline things such as how often base runners successfully steal bases, and how many hits end up in double plays.

Hopefully the outline of an ideal softball batting order provided above will help your team score more this season!